in Kentucky, Louisville, Other Stores Comments Off 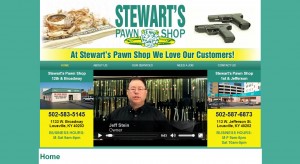 Stewart’s Pawn Shop address, phone, website, hours of operation, and more. Stewart’s Pawn Shop is a family owned and operated business, that has been in Louisville for 42 years. Stuart and Ron opened the original store on south 4th Street in November of 1971, and have been serving their beloved customers ever since. In November of 1989 the store had to move locations due to city expansion. Little did Stuart and Ron know, that the new location would grow their business to the huge success it is today. The store is now located at 1133 West Broadway (On the corner of 12th and Broadway). The new store came equipped with a drive thru window and Stewart’s became the first Louisville pawn shop to offer drive thru loan business.

In 2000 Stewart’s Pawn Shop expanded and added an additional store. Another local pawn shop was getting out of the pawn shop business and Stuart and Ron stepped up to the challenge. With so many chain pawn shops trying to come into our city, Ron and Stuart were trying to keep it local. Now with a new store at 113 West Jefferson (the corner of 1st and Jefferson st) and the original store at 1133 West Broadway, Stewart’s Pawn Shop was headed into the future.