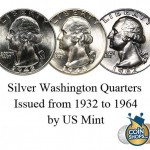 Silver Washington Quarters were minted between 1932 to 1964 at 90% silver. The weight of pure silver is actually .1808 troy oz. These are not classified as bullion but rather United States minted coins.They are massed produced at the rate of several million each year up until 1964, and can easily be found in general circulation even today. There are silver minted ... END_OF_DOCUMENT_TOKEN_TO_BE_REPLACED