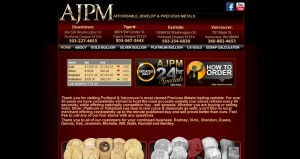 AJPM address, phone, website, hours of operation, and more. AJPM was founded by Rodney and Vicki Scott in 1991, but their story begins much earlier. Through hard work and dedication Rodney and Vicki had opened 4 precious metal businesses in the Portland metro area as well as Vancouver , Wa. Another venture was the Portland Minting Company and Medallion Specialties Inc. which was opened in 1986 and the first in the US licensed by the NBA to make “star” player medallions, including Magic Johnson and Michael Jordan to name a few. Other medallions included the Oregon Trail, the Rose Festival, US Military and many more. By 1991 they had consolidated all of their precious metals and jewelry operations into one entity, which stands today as AJPM.