in Coin Articles Comments Off 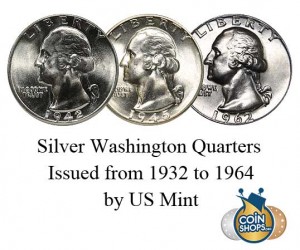 Silver Washington Quarters were minted between 1932 to 1964 at 90% silver. The weight of pure silver is actually .1808 troy oz. These are not classified as bullion but rather United States minted coins.They are massed produced at the rate of several million each year up until 1964, and can easily be found in general circulation even today. There are silver minted Washington Quarters that post date the 1964’s but these newer coins are only minted at the San Francisco mint and sold in either silver proof sets with a few exceptions.

“The Washington quarter is the present quarter dollar or 25-cent piece issued by the United States Mint. The coin was first struck in 1932; the original version was designed by sculptor John Flanagan.” – Wikipedia

I’m not a betting man but I willing to bet that nearly every person alive over the age of 18 has at one point in time held a silver Washington Quarter. I’m guessing however that 95% of those people didn’t know what they were holding because they simply didn’t know the range of dates to look for.
Every coin shop worth it’s salt is going to have these coins in stock, but you are of course going to pay a premium. If you are looking to pick up a Silver Quarter (Washington or other) in circulation you are going to have to look in all the regular places. Coin rolls, soda machine change, gas station change, etc. They are not hard to find really if you are looking. My wife recently brought home a 1942 Quarter from her trip to a local barbecue joint where she had paid with cash.
Where should you buy your quarters?
Use our coin shop directory to find your local coin shop and give them a call or pay them a visit.
Washington-Quarters.com has more details on all these coins so we have included links to those pages rather than simply copy and paste the prices.