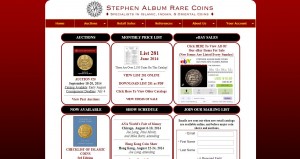 Stephen Album Rare Coins address, phone, website, and more. Stephen Album Rare Coins is an American company specializing in ancient, Islamic, Indian, Chinese and modern world coins. The company produces monthly fixed-price catalogs and three major auctions each year, in January, May, and in September. We are the world`s leading dealer in Islamic and Indian coins.

Stephen Album began as a full time dealer in numismatics in 1976. The firm grew in 1981 when Norman D. Nicol joined the firm as Steve`s full time assistant. In 2001 Joseph Lang joined the firm and became a full partner in 2004. The firm has grown considerably since Michael Barry joined the firm in 2008, and in 2010 the company moved to a new much larger office in Santa Rosa, California.